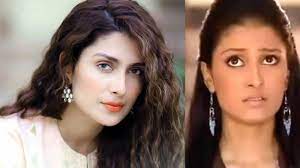 KARACHI: Pakistani television actress Kinza Khan more commonly known as Ayeza Khan is widely celebrated for her milky complexion and sharp face features leading her to be declared as a Pakistani goddess.

However, netizens are now compelled to call her ‘ugly’ due to an old video getting ultimate attention across social media in which Ayeza’s complexion according to social media users looks ‘dark black’.

This clip is from a TV drama serial from 2007/2009 and it started getting a lot of views due to Ayeza’s ‘appalling appearance’ back then which is completely opposed to as she is now.  Here is the clip:

One netizen commented: ‘Paisa bolta hai my baap’. This comment is emphasising on the fact that Ayeza looks so appealing now due to spending a massive sum of money on getting her face to look like this.

Many commented over how Ayeza completely transformed herself through cosmetics and other whitening products.

Another netizen commented: ‘She wasn’t ugly. She was poor’. Here are some of the comments:    Ayeza Khan is a 34-year-old Pakistani television actress who is the recipient of  Lux Style Awards, Hum Awards and Pakistan International Screen Awards.Watch: Indian cop singing ‘Bhar Do Jholi’ video goes viral Ayeza Khan is considered to be one of the most celebrated actresses of Pakistan and has appeared in mega hit Pakistani serials including Mere Paas Tum Ho and Pyare Afzal.

She tied the knot with Pakistani actor and model Danish Taimoor in August 2014.