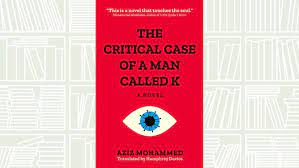 CHICAGO (Arabnews): The youngest writer —and the first debut author — to be shortlisted in the history of the International Prize for Arabic Fiction is Saudi Arabia’s very own Aziz Mohammed for “The Critical Case of a Man Called K.” Hailing from AlKhobar, Mohammed’s novel follows a young man named K whose is hyper-aware of the monotony of his life. Everything, up until now, has been predictable, but when fatigue sends him to the hospital, K learns that he has leukemia. Translated into English by the award-winning Humphrey Davies, the story of K is a tale that takes an intimate look at a young man’s life when he is faced with illness and death.

K is introspective almost to the point of exhausting himself. He has a mother who has always taken care of him but equates reading books to being as harmful as smoking, a father who dies before he finishes high school and a sister and brother who do everything they are asked to do. K, on the other hand, fights the tedium while attempting to be a good son. Pulling references from his favorite authors, such as Kafka, Hemingway, and Tanizaki, he feels his life as an IT graduate, which was the chosen career path for financial reasons, is not what he wants to do, and he longs for something different.

Through K, Mohammed has created a character who is sensitive to how his presence affects everyone around him, as if he can see his sound waves rippling through people and altering them. He longs for inspiration to write a novel, but the environment does not concede to exploration or anything out of the ordinary.

Mohammed’s debut novel is a darkly humorous look into the life of a man who desires more in life when he is diagnosed with leukemia. The journey into illness is intimate and distressing, watching someone’s world turn upside down while at the same time offering an alternative to the mundane and predictable. There is rawness to life when faced with death, duty bound mothers, sons, and daughters, the tension and love between children and parents, and the fragility of the system when love and tradition don’t always move parallel to one another.