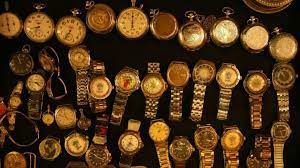 With pseudonyms like the The Bastard, The Broker, The Astronaut and The Vampire, they’ve banded together deep inside the world of Soviet-era watch collecting.

This cabal of watch aficionados spans the globe, albeit in cyberspace, bringing history to the wrists of thousands with timepieces dating back to the days of Stalin.

Dashiell Oatman-Stanford calls himself “a Soviet watch nerd.” His friends call him The Catalog.

His website, Watches of the USSR, reveals why. It brings together highlights from his exhaustive archive of around 3,000 pieces. Some come and some go, as he refines and revises his collection. But despite only starting his hobby seven years ago, Oatman-Stanford is one of the czars of historic Soviet watches.

“Why Soviet watches?” he asks on his website. “I am not a collector of watches as much as I am a collector of history and culture — fragments of a life that once was. And indeed, these timepieces have an incredible tale to tell.”

“Soviet watches are functional and utilitarian, but dig further and you uncover a world of mystery and intrigue, color and pizzazz,” writes Texas-born Oatman-Stanford who now lives in the former Soviet republic of Estonia.

Oatman-Stanford and his Soviet watch collector friends have carried that mystery and intrigue into the present era, forming what they call the Bureau of Russian Watch Intelligence.

Membership of this secretive collectors group comes by invitation, said Ulices Rosa, who founded the bureau a few years ago by connecting people asking questions about Russian watches on Facebook. If you’ve been snooping around about Soviet watches, he may just find you.

With his Jersey accent, Rosa might have come from central casting for an old black-and-white Hollywood movie to head up a shadowy bureau. The Lansing, Michigan, resident calls himself The Broker, and you could imagine him selling watches stashed in his overcoat.

“I’m the guy who’s constantly connecting the others to the sale,” he said in a video interview.

Other members include The Vampire, in Malaysia, who’s up at all hours making watch deals, Rosa said. Then there’s The Astronaut, an Italian guy specializing in Soviet watches related to the USSR’s space missions. “A niche, upon a niche upon a niche,” as The Catalog puts it.

The Bastard, the youngest of the group, lives in the Netherlands. He once found a $1,000 Soviet watch for $50. He’s “the luckiest guy,” Rosa said.

The Broker, meanwhile, can do things that will make your jaw drop. He recalls viewing the third season of the Netflix hit series “Stranger Things” and seeing a mission emerge. His 14-year-old son wanted the watch worn by Alexei, the Soviet scientist on the show. Freezing the frame, The Broker determined that it was a Kirovskie model, made by the Soviet’s First State Watch Factory in the 1950s or ’60s.”I went on a hunt as soon as my son spotted it,” he said. “I found it within two weeks for about $36.”Eerie photographs capture the Cold War’s abandoned ‘ruins’

The story illustrates just what make Soviet watch collectors tick. It’s a hobby that gives them a relatively cheap way to connect with a bygone world. A working, presentable and likely authentic Soviet-era watch can be easily found on the internet for under $100 and in some cases as low as $40 or $50, Rosa said.

Nobody is buying Russian watches or Soviet watches for the reason that most people buy watches, which is it’s a fashion piece, a jewelry accessory,” he said.

“It is purely for the interest and intrigue, exoticism, the military connection.”

The Soviet watch industry traces its roots to what was then America’s industrial heartland.

“To coordinate anything in a modern world you need reliable time pieces, and the Soviets didn’t have anything of that sort,” Oatman-Stanford said.

The equipment and know-how for Moscow’s First State Watch Factory was imported from Dueber-Hampden Watch Co., a Canton company that went bankrupt in the late 1920s, according to the city’s local newspaper, the Canton Repository. A 2016 report in the paper said that a company representing the Soviet Union’s trade interests in the United States “bought bankrupt Dueber-Hampden’s watchmaking machines for $325,000, loaded it onto train cars and shipped it off to Russia.”

Because the Soviets were short on skilled labor, they brought in American workers too, paying them handsomely for their efforts with an average yearly salary the equivalent of $70,000 in today’s currency — plus free housing and travel expenses. One worker bragged that he was being paid “more than … Stalin, earned at the time,” the Repository reported.

With the equipment to kick-start their watch industry, the Soviets also brought in technology from places like France and Switzerland to improve their watchmaking. Victory over Nazi Germany in World War II also gave the Soviet watch industry a boost, said Rosa.

The Soviets copied some of the best timepieces worn by German soldiers, he added. “Those happen to be the most expensive of the Russian watches — the ones that are exactly copied from the German military,” Rosa said.

Using all those resources, more factories were established around the country, and they turned out hundreds of millions of watches before the Soviet Union broke apart in 1991.

‘A tank on your wrist’

Rosa said the watches became a symbol of Soviet resilience and pride in a country that had rallied to defeat Nazi Germany and become a world superpower.

One of the most famous Soviet watch brands — Pobeda — is the Russian word for “victory.” The name was ordered directly by the Kremlin after World War II, according to the website of its manufacturer, Raketa. The watches “symbolize the willpower and heroism of the Russian people,” the website says.”

There’s a sense of grit with their watches,” Rosa said, describing them as “robust.”

“You feel like you’re putting a tank on your wrist,” he said, admitting that the military connection is what first appealed to him. But there’s room in Soviet watch collecting for those who aren’t military enthusiasts.

CS Lee, aka The Vampire, said the military models don’t do much for him. He loves designs based on polar expeditions or space flight. These are the pride of his collection of 500-plus Soviet-era watches.

Oatman-Stanford, meanwhile, is partial to the dress styles, with “simple and clean” designs.

“I find Soviet designs tasteful and interesting, the Cyrillic writing exotic and alluring, the history endlessly fascinating, the prices affordable and the number of variations mind-boggling,” he said on this website.

Like Rosa, Oatman-Stanford is struck by the reliability of Soviet timepieces.Eerie photos show dilapidated relics of the Soviet era“

The Soviets built their watches so smartly and so well,” he said. And they standardized components, making repairs and service easy.

“If a part from one fails, you can go to almost any other watch from this factory and this era and swap it over.”

The rise of the Frankens

While that interchangeability was a convenience in the Soviet era, it can be a headache for modern collectors.

When the Soviet Union collapsed in 1991, it left an economy in disarray. Citizens looked for ways to get money, and their millions of watches offered an opportunity. Lee said that Soviet watch factories turned out 30 million to 50 million watches a year, and that a Polish contact told him of Russians selling timepieces by weight for as little as $5 a kilogram (2.2 pounds).Some salvagers dug through piles of watches looking for gold to melt down and sell. Others mined them for parts and assembled them into new watches, which collectors call “Frankens” — a reference to Frankenstein.

In Russia, Oatman-Stanford said, they have another term. “The translation for this is ‘cutlet,’ like ground beef,” he said, “a kind of mishmash of parts that they’ve smushed together to form a patty.”

To novice and experienced collectors alike, the Frankens can be hard to spot. Bureau members look for clues, like the words on the dial, the shape of the crown and machining marks on the inner workings. But they point out that there’s really no single authority to determine where these watches came from — themselves included.

While Frankens may not epitomize the Soviet era, they can be just as much fun for the not-so-serious enthusiast, the collectors say, while still giving a sense of the Cold War.”

It seems fashionable now to look toward what is nostalgic, and I think a lot of people are interested in these cool, unique pieces from history,” Oatman-Stanford said.

And even if an acquisition turns out to be a fake, Lee said, the price — likely below $100 — is worth the experience.

‘You can never have enough friends’

For English speakers, Frankens and authentic originals can be quickly found on websites such as eBay and Etsy. Some of the dozens of brands to look for include the aforementioned Pobeda and Raketa, as well as Komandirskie, Sekonda, Slava, Strela and Vostok.

To improve your chances of getting a fair price for an authentic timepiece — and one that will actually show up in the mail — the Bureau of Russian Watch Intelligence advises paying careful attention to the reviews. Most of the Bureau got their starts shopping online, though once they got serious, they found better, cheaper sources.

Lee said he has contacts in places like Spain, Italy, Russia and Romania who will search flea markets for him, looking for specific watches he wants to add to his collection.

“You can never have enough friends,” he said.Meanwhile, Oatman-Stanford, who can repair and refurbish his own watches, said he has established a network of middlemen who buy him cheap watches on the Russian and Ukraine domestic markets.

“I send them money and then they send me in bulk — 20, 50, a hundred at a time,” he said. He can then sort the wheat from the chaff himself.

When Rosa wants something, he’ll often consult a mysterious figure known as The Oracle, a Ukrainian who only communicates by email.

“The Oracle never talks to anyone in person,” Rosa said, but “he knows it all … There’s no fooling this guy.”

After exploring the world of Soviet watches, I needed one of my own. I scoured the web for hours searching for an authentic model.

With some advice from Oatman-Stanford, I pulled the trigger on a Vostok Amphibian, which collectors affectionately call “Scuba Dude” for the diver on the dial. The package arrived from Russia complete with Cyrillic stamps and an illegible handwritten return address.

Examining it via video chat, Rosa said my Scuba Dude ticked all the boxes, including the “Made in CCCP” on the dial — proof that, as advertised, it was manufactured in the 1980s, before the CCCP (the Russian abbreviation for the USSR) collapsed.

Purchase a few more of these and I could become a card-carrying member of the Bureau of Russian Watch Intelligence, Rosa suggested.The Journalist isn’t taken yet.