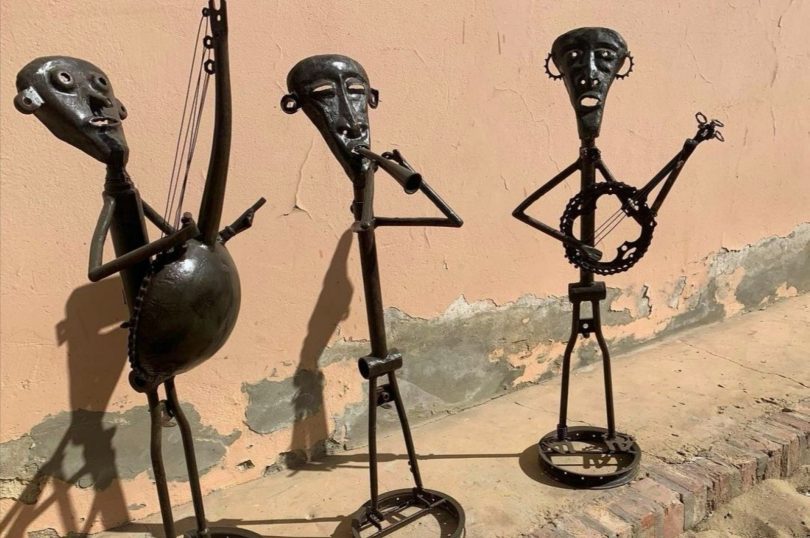 SAINT LOUIS (Dailysabah): The city of Saint Louis in Senegal will host its major event “Artistic Itineraries of Saint Louis” from June 5-30. Senegalese artist Meissa Fall, who breathes new life into old items, this time with used bikes by turning them into spellbinding sculptures, has been securing his place at this event for a decade. The event organizers know that visitors will be influenced by his atypical sculptures again this year.

Fall explained to Anadolu Agency (AA) how he applies his passion for the two-wheeled machine. “My father and grandfather were bike repairers and they passed on the passion for bikes, ” he said.

If he is unable to repair bikes as his father taught him, he dismantles them and makes sculptures in various forms. It is a way for him to give bikes a second life. “On the surface, when people look at a bicycle, they see nothing more than a bicycle. And yet beyond appearances, this machine has several lives and can represent various objects, for me it is the most beautiful invention in the world. It should not be wasted. In addition, it is environmentally friendly because it does not consume gasoline or gas,” he elaborated.

While cleaning bicycles in his father’s workshop during his childhood, Fall thought that everyone should have a bicycle, if not, a memory of it. So, he thought of sculpting the used bikes. “I am also inspired by the nature of my city of St. Louis to create shapes,” he said.

For more than a decade he has created countless sculptures, according to the artist. His daily bread comes from this activity as well as from repairs.

Depending on the size, time invested, weight and inspiration, the prices of his sculptures start at $140.

In 2018, he ventured out of Senegal to exhibit in Paris and scored his biggest sale. He sold a piece for more than $3,700, a sculpture that took a week to make.

He has not yet drawn in such prices in his country because, according to him, “Africans rarely buy his works, and no one is a prophet in his own home. “

“Westerners are the main buyers because they have never seen my creations. Nobody could imagine that we can make art with parts of bicycles,” he added.

For his agent and admirer Madieye Sall, who is also a Senegalese artist, “in Africa few people are really interested in art. They appreciate the works of Fall but are content to take pictures. They rarely buy, unlike Westerners who are very interested. Many of them export his works to their countries,” he told AA.

When Fall is not having an exhibition, tourists guided by the city’s tourist guides visit him.

“His workshop is our Eiffel Tower. He is so impressive with his bikes and sculptures, and he is famous around here. He is the surgeon of bikes,” Sall said.

In Senegal, the use of the bicycle is not the prerogative of the population. According to Sama Velo, an association that fights for the promotion of the bicycle in Senegal, 85% of the inhabitants of the capital Dakar do not have a bicycle, while 15% perceive it “as a means of recreation, a means of doing sports. A small part of the population uses it for their daily trips.” “Road safety is the main disadvantage, according to the people of Dakar, for the practice of cycling. It is also the first criterion for the choice of a route for travel by bike,” the association wrote in a guide for the practice of cycling in Senegal.