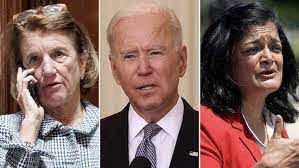 WASHINGTON (thehill): President Biden is at a crossroad in infrastructure talks that could determine how much of his agenda he will accomplish before the midterm elections.

Facing pressure on all sides and a self-imposed August deadline, observers expect Biden to make a definitive choice in the next few weeks to either make a deal with Republicans or try to pass legislation along party lines.

Republican senators on Thursday put forward a roughly $1 trillion offer that may represent Biden’s last, best chance at a meaningful bipartisan deal. But agreeing to the GOP offer would spurn progressive Democrats who view it as a non-starter, and could subsequently imperil the likelihood of getting climate change, education, voting rights and other Biden priorities passed.

Infrastructure has long been viewed as one of few likely areas for bipartisan agreement, and the White House has engaged in talks with Republicans since Biden announced his $2.25 trillion American Jobs Plan at the end March.

The slimmed-down offer from Sen. Shelley Moore Capito (R-W.Va.) and several of her GOP colleagues is all but daring Biden to take “yes” for an answer so he can point to some sort of bipartisan achievement after spending much of the 2020 campaign pledging unity and touting a career of working across the aisle. Capito is expected to meet with Biden for further talks on Wednesday.

But the two sides remain far apart on the scope of a potential bill – by roughly $700 billion after Biden countered with a $1.7 trillion package – and disagree on whether Biden’s proposed investments in climate initiatives and long-term care workers constitutes infrastructure. The Capito-led offer includes just $260 billion in new spending, a fraction of what Biden has proposed.

Perhaps most glaringly, they disagree on how best to pay for it, with Biden calling for corporations and wealthy Americans to face more in taxes while the GOP suggests user fees that the White House has ruled out.

“We’re going to have to close this down soon,” Biden said of infrastructure talks last week, shortly after Capito and other GOP senators unveiled their latest proposal.

Transportation Secretary Pete Buttigieg said on CNN Sunday that the Biden administration is “getting pretty close to a fish-or-cut-bait moment” on infrastructure negotiations with Republicans while describing the ongoing talks as “healthy.”

Biden’s decision in many ways comes down to how important passing a bipartisan infrastructure bill is compared to getting more of his priorities through Congress. Biden allies say he genuinely wants a bipartisan deal and that the negotiations are not just for show, but it’s unclear whether the White House is willing to come down from its $1.7 trillion counteroffer.

Progressive Democrats, who Biden has pleased with early moves on climate change and racial equity and his ambitious $1.9 trillion economic relief law, have urged the president to reject the latest GOP effort. Some have also pushed him to move forward now through budget reconciliation, which would not require any Republican votes to pass legislation if Democrats remain in lockstep. While some priorities would be stripped out due to reconciliation rules, it would still satisfy far more of the Democratic base than a scaled down bipartisan version.

Rep. Pramila Jayapal (D-Wash.), head of the Congressional Progressive Caucus in the House, issued a statement Friday calling for the American Jobs Plan and American Families Plan — roughly $4 trillion in new spending and tax credits combined — to be moved via the reconciliation process.

“Just like we did with the American Rescue Plan, we believe we must go big, bold, and act with urgency,” Jayapal said. “We simply cannot afford to limit our ambitions for Republicans or continue to wait for an offer that will never materialize.”

Others have criticized the Republican offer as unserious while stopping short of telling Biden to pursue reconciliation immediately.

“No meaningful climate action means no deal with the Democrats,” Sen. Ed Markey (D-Mass.) told reporters on a call Thursday, slamming the latest GOP offer. “Going small on this package or breaking the packages up is really just another form of climate denial.”

Markey said he would give Biden space for negotiations but expressed doubt about Republicans’ intentions.

“The time will expire for negotiations as Republicans continue to play the game of not moving in good faith and then we will just have to be forced to move forward without them, but I think for the time being we’ll just give President Biden additional time to continue that negotiation, but not to a point where it blocks us from acting by the end of July or the beginning of August,” Markey said.

Karen Weaver, the former mayor of Flint, Mich., and interim executive director of the African American Mayors Association, said the organization has pushed Biden administration officials to press forward with a more ambitious infrastructure package or risk worsening disparities in quality of broadband, roads, bridges and pipes in minority communities.

“I have faith in the president and we talk all the time and he’s going to try to pursue bipartisan where he can but not let it stop him,” Schumer told reporters at a news conference.

Some Democrats say that if Biden shows that he tried to pursue a bipartisan deal, that will be enough for voters if the talks become stalled without progress.

“Voters want to see an effort made but they don’t want progress to be blocked for the sake of getting Republican votes in Congress,” said Democratic strategist Josh Schwerin. “We’re quickly approaching the point where it’s time to pull the plug.”

Successfully pushing a large bill through budget reconciliation presents another challenge — it would require Biden to get moderate Democrats like Sens. Joe Manchin (W.Va.) and Kyrsten Sinema (Ariz.) on board by allaying their concerns about the price tag of his agenda.

And even if Biden does ink a deal with Republicans, he is still expected to pursue the remainder of his agenda through a reconciliation bill.

Jim Kessler, executive vice president for policy at centrist Democratic think tank Third Way, argued that Biden would not risk parts of his agenda by moving forward with a bipartisan deal because he would face the same challenges with reconciliation one way or another.

“The same problems that could occur in a second package after a bipartisan deal are the ones that would occur with a single package –what comes in, what goes out,” Kessler said.

Biden is slated to meet with Capito on Wednesday. The president could let negotiations stretch further into June, advisers said, allowing more time for lawmakers to figure out a path forward.

The president will head to Europe for his first international trip since taking office in mid-June. At that point, Biden will likely need to make a final decision on whether to meet Republicans where they are, or move forward via reconciliation.

“There will be a point where this either is coalescing or it’s coming apart,” Kessler said.