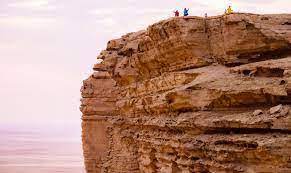 RIYADH (Arabnews): In recent times, Edge of the World — a spectacular viewpoint located in the Tuwaiq cliffs that run through central Saudi Arabia — has become a popular getaway for urbanities looking for respite from the concrete jungle of Riyadh city. Come cool weather, visitors flock to the area for a day of trekking, camping or picnicking. On my first visit, my guide for the day was Meteb Almahmoud, owner of Amazing Tours.

There are several other landmarks on the journey from Riyadh to Edge of the World, as Almahmoud explained. One of the most notable is the ancient city of Qaryat Al-Faw, located in the foothills of the Tuwaiq Escarpment, near the present-day village of Wadi ad-Dawasir and overlooking the northwestern edge of the Empty Quarter.

“From the first century BCE to the fourth century CE, Al-Faw was an important trade route,” he explained. With several intact burial mounds and graves, the site provides valuable information on the people and history of pre-Islamic Arabia. Artifacts including bronze statues, silver and copper jewelry, and gemstones have been excavated from the area and are on display at The National Museum in Riyadh. Currently, the site is being developed as a tourist attraction.

On the last leg of our journey, we passed through the main access gates at Sha’ib Kharmah (a valley of acacia trees). After two hours of driving, we reach our destination. Jebel Fihrayn is one of the many cliffs along the Tuwaiq Escarpment, which runs more than 600 kilometers through the Kingdom — from the province of Najran, all the way to the southern border of Qassim, ending at Az-Zulfi.

“Some 30-35 years ago, expatriates exploring the area stumbled upon this cliff. 300 meters high and over 700 meters long, it offers phenomenal views of the vast desert. Since then, it has become popular as Edge of the World,” Almahmoud told me.

Florent Egle, a French expat and ardent explorer told me that when he first came to the area in early 2010, there was only one other car around and no roads or gates to access the area. “Now, there is sufficient infrastructure for visitors to come and go easily,” he said.

For geologists, the Tuwaiq Escarpment provides a unique opportunity to study the geological history of the world’s largest oil fields in eastern Saudi Arabia. Charles Kerans, professor at the University of Texas, Austin and principal investigator in the Tuwaiq Mountain limestone project, who has studied the escarpment on Google Earth and in person, described it as “one of a kind.” The reservoir sediments were formed nearly four million years ago and date back to the Triassic and Jurassic periods. “Geographically, it is a very clean outcrop with layers that are relatively continuous, undisturbed, and intact,” Kerans explained. “The escarpment is also considered one of the best examples of warm water deposits in the world — very warm, low, and with excellent examples of marine deposits from when the Arabian Peninsula was a shallow tropical sea.”

That explains why it is not uncommon to see 200 million-year old fossils like corals and clams along the trail. The escarpment is of interest not just geographically, but historically as well.

In the 3rd century BC, the Arab Peninsula held a monopoly over the production and trade of frankincense and myrrh. Known as the Frankincense Trail, the trade route passed through Hadramout in present-day Yemen to Persia, while the western route traveled through the Roman Empire.

As I got out of the car and headed towards the ‘rock-framed window,’ I expected to see another series of nondescript mountains. But, lo and behold, the cliff drops sharply and gives way to dried-up wadis and acacia valleys below.

The sheer scale of the area amazed me. On either side, ridges, sandstone cliffs, and extensive canyons cut through the plateau. As the sun set against the deep ridges of the rock formation, the entire area was resplendent with hues of dull reds and browns. The valley below merged into the sky in a hazy monotone, seeming endless. The vast desert stretched out below me and I had the illusion that I was indeed, standing at the edge of the world.

Having experienced the magnitude of the area, and learning its geographical and historical significance, I reflect on Kernas’ words. It is truly, one a kind.