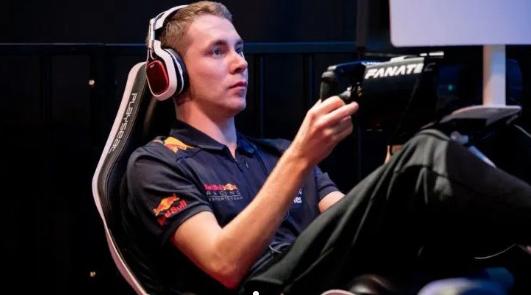 Graham Carroll was racing his BMW touring car around the Interlagos race track in Brazil at speeds of up to 250km/h (155 mph).

For the 30-year-old Scotsman the race went well. Despite stiff competition from a strong field of competitors, he and his Red Bull teammate Sebastian Job emerged victorious.

Only they weren’t really at the race track in Sao Paulo back in November. No-one was.

Carroll was back in the UK, plying his trade in the competitive world of e-sports. A professional e-sports race car driver, he pocketed $1,200 (£860) for the win.

Even before Covid-19 arrived, the world of competitive e-sports had built up huge viewer numbers, with people watching events on their computers around the world.

Then the pandemic hit, most of us were stuck at home, and audience figures rose even higher.

Last year, 435.9 million people around the world watched e-sports events, according to figures from NewZoo, a market research group that focuses on the sector. That was 10% more than 397 million in 2019.

At the same time, e-sports worldwide revenues hit $947m in 2020, driven by sponsorship from the likes of Coca-Cola, Gillette and Nike.

The start of the pandemic last year gave e-sports an unexpected boost, because with much professional sport paused, many real world players started to try their hand at the virtual versions.

In the case of Formula 1, drivers such as Max Verstappen, Lando Norris, Carlos Sainz and George Russell swapped their cars for gaming rigs.

While in football, Gareth Bale, then of Real Madrid, and now of Tottenham, was one of many to pick up a gaming controller. And some football clubs formed their own e-sport teams, such as Manchester City, and Portuguese side Sporting Lisbon.

Carroll, himself a former real world driver in the Formula Ford classification, says it gave e-sports a big boost.

“When the pandemic hit, for the first few months of it, so many e-sports championships started with real-life drivers, and [existing e-sports] drivers racing against each other,” he says. “It was brilliant. The viewing numbers really grew… now there are people hooked on e-sports. It opened a few people’s eyes.”

“We saw exponential, deep double-digit growth, with events, sponsorship, prize money, team formation, and new leagues. It was all turbocharged.”

Mr Deutsch’s comments were echoed by Giuseppe Guastella, who plays the football video game Fifa professionally for US side Los Angeles Galaxy.

“It’s grown a lot, and the prizes have gotten so much better than in previous years,” he says. “Now there are multiple [football] competitions, and the prize pool is $1m to $2m throughout the season, it is going to keep growing and growing.”

Ivan Curtiss, general manager and coach of the e-sports side of US basketball franchise Brooklyn Nets, says the pandemic has changed the perception of gaming in general, opening it up to more people.

“In the past, people have been criticised for staying in the house and playing video games for hours,” he says.

“But people are now realising that individuals are out there making a living from video games.”

Rob Kingyens says it is important to remember that it is not just the players who can make money from e-sports.

He is the founder and chief executive of Yellowbrick, an online learning platform that last year launched a gaming and e-sports course in collaboration with New York’s Fashion Institute of Technology.

“Games have evolved to be more complex and nuanced… all this means more jobs, more specialisation, a richer ecosystem,” he says.

Mr Kingyens adds that this means that game developers can typically make up to $132,000 a year.

Meanwhile, Robert Rippee, a director of the International Gaming Institute at the University of Nevada-Las Vegas, says e-sports have been boosted by professional real world teams setting up gaming divisions as an additional way of engaging with existing fans, and perhaps creating new ones.

“It’s a smart move,” he says. “From a strategy perspective it gives them a new audience that may not have engaged with them at all, or at the same level, through their traditional media channels. Video games are also not seasonable.”

But with the pandemic hopefully going to end this year, and the world returning to normal, is the growth of e-sports sustainable when people are able to attending real world supporting events again?

Mr Deutsche says he isn’t sure if the current rate of growth can continue. He adds: “When things open up a bit, there will be a natural human reaction to be out in the world. There are so many things competing for leisure time.

“And the one thing you can’t expand is that time, and people have to be selective about where they want to spend it.”

Bailey Morrow, an expert on e-sports at Silicon Valley Bank, is more confident.

“I think viewership will continue because we are seeing the combination of 5G enabling [better] mobile streaming, popular social sites showing e-sports tournaments, and celebrities such as Will Smith and Michael Jordan investing,” she says.

The industry predictions back up Ms Morrow’s confidence. The number of people around the world watching e-sports is tipped by NewZoo to rise a further 9% in 2021 to 474 million, with revenues up 15% to $1bn.