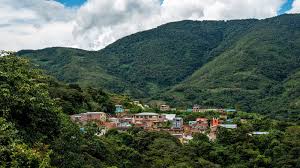 Bolivia’s La Paz is the highest capital in the world. At 3,690m in elevation, its air is cold and thin, leaving many visitors gasping for oxygen and experiencing altitude sickness, known locally as soroche. But if you push past the chaotic traffic and drive 100km north-east, descending into the sub-tropical Yungas valleys, you’ll discover a cluster of quiet villages hidden in the forest connected by a labyrinth of dirt roads.

There, hidden amid the tapirs, jaguars and spectacled bears that call the Yungas home is a remarkable community that has remained largely unrecognised by the outside world for nearly 200 years: the Kingdom of the Afro-Bolivians – the spiritual capital of thousands of Bolivians of African descent and one of the last kingdoms left in the Americas.

The roughly 2,000 inhabitants of this hidden, humble kingdom are mainly farmers who live next to their small land plots, where they grow coca, citrus and coffee. In Mururata, a village of around 350 inhabitants, free-range chickens cluck loudly on dirt roads, children play together in the streets, and men and women work the land with hoes and emerge from the forest carrying newly chopped bundles of firewood. Others sit in front of their tin-roofed homes, greeting passersby and waiting for the first stars to appear in the sky at dusk.

Afro-Bolivians are descendants of the enslaved West Africans brought by the Spanish between the 16th and 19th Centuries to work in the mines of Potosí, a city in south-western Bolivia that was more populated than London in the early 17th Century. According to Uruguayan journalist Eduardo Galeano, the mines are notorious for claiming the lives of roughly 8 million enslaved indigenous South Americans and Africans over a 300-year period – many of whom died as a result of being overworked, underfed and suffering in the region’s extreme cold.

In his book Los Afroandinos de los Siglos XVI al XX, former Bolivian MP Jorge Medina, an Afro-Bolivian himself, explained that his ancestors couldn’t adapt to the cold weather of Potosí in Bolivia’s southern highlands. In the beginning of the 19th Century, they were relocated to the warm Yungas to work on the Spanish-owned hacienda plantation estates. It was here where this unofficial “kingdom” formed in 1820 among a group of enslaved Afro-Bolivians. Though this mini-monarchy has always functioned more like a tribe, after 187 years, the kingdom was finally recognised by the Bolivian government in 2007.

A remarkable community that has remained largely unrecognised by the outside world for nearly 200 years: the Kingdom of the Afro-Bolivians

Mururata is the centre of this kingdom and is where the king of Afro-Bolivians, Julio Bonifaz Pinedo lives and “rules” over the community’s 2,000 residents – yet, it would be difficult to recognise him, as he largely blends in with the other villagers. In fact, one might buy a bundle of bananas from him without realising his title, as he manages a small grocery store from his small brick-and-cement home.

Co-managing the store is his wife, the queen Angélica Larrea. From their garden, they also sell mandarins, oranges, canned food, soft drinks and packages of cookies, among other basic supplies. At 78 years old, Pinedo still keeps himself busy. When I met him, he was in front of his store, spreading coca leaves on top of a large, blue tarp.

“These are the leaves I’ve harvested from my small plot of land. By exposing them to the strong midday sun, I have them ready in just about three hours. Then I’ll put them in sacks for the trucks that will take them to the markets of La Paz,” he explained. For centuries, the indigenous people of the Andes have chewed coca and used it in teas to suppress hunger, fatigue and help overcome soroche.

When Pinedo finished the task, he sat on a wooden chair at the entrance of his store as neighbours casually greeted “Don Julio”. The queen, Doña Angélica, sat behind him on the stairs leading to their home, where she watched a soap opera on a small television perched atop a tall display cabinet. Nothing about the royal family speaks of self-importance. Their humility has earned them well-deserved respect in the community.

According to the latest Bolivian census in 2012, more than 23,000 people identify as Afro-Bolivians. But taking into account people of mixed backgrounds, that number is probably more than 40,000, according to Medina. While the Afro-Bolivian diaspora has spread all over the country and the world in the last few hundred years, its roots and its king are here in the Yungas.

Pinedo is the first of the kingdom’s monarchs officially recognised by the Bolivian state. This recognition came during a broader acknowledgement of Bolivia’s minority ethnic groups when Evo Morales became the country’s first indigenous president in 2006. Three years later, the country officially changed its name to The Plurinational State of Bolivia, and a new constitution was approved acknowledging 36 Bolivian nationalities (including the Afro-Bolivians) following a historic referendum that gave more power to the country’s long-marginalised indigenous groups.

The powers of the Afro-Bolivian king are similar to those of a traditional chief. Pinedo does not collect taxes or have a police force. “My title [as king] is mostly symbolic,” he said. “I’m not like these rich kings of Europe, but I represent the Afro-Bolivian community, and this is a huge responsibility to me.”

Larrea added, “If there is a conflict between two Afro-Bolivians they can come and ask him for advice.” She then explained Pinedo’s legendary lineage. “His ancestors were kings in Africa. That’s how it all started.”

His ancestors were kings in Africa. That’s how it all started

According to Pinedo, when his ancestors arrived in the Yungas in 1820, one of his relatives named Uchicho was bathing in the river and his African companions saw that his torso had scars reminiscent of members of a tribal royal family. Uchicho turned out to be a prince from the ancient Kingdom of Kongo, and was acknowledged as such by the other enslaved people.

Pinedo reached for an old identification document from one of the cabinets. “This was my grandfather, Bonifacio, who became king in 1932,” he said of his predecessor. The document showed a photograph of a man wearing a vest and a kerchief tied around his neck. It said that he was born in 1880, with the address Hacienda de Mururata and that he was a labrador (farm worker). King Bonifacio only had daughters, so one generation was skipped, leaving the kingdom without a king for 38 years until Pinedo was crowned in 1992 by the community. In 2007, as Morales’ government expanded the acknowledgement of Bolivia’s ethnic minorities, Medina successfully lobbied to hold an official crowning ceremony for Pinedo in La Paz.

As news of Pinedo’s official recognition by the Bolivian state spread, so did the awareness of the nation’s Afro-Bolivian community. “[A Bolivian production company] filmed a documentary about us and invited our family to travel to Uganda to see the land where our ancestors [are likely] from,” Pinedo said. He explained that in the few times he had left Mururata, he was aware that he was a minority in his own country. But by seeing so many black people who looked like members of his own family in Uganda, he became much more aware of his roots.

Look out from anywhere in Mururata and you’ll see the green of laurels, arboreal ferns and other tropical trees covering the hills. On top of one of these hills is the Royal Cemetery, sadly in a state of neglect. Similarly, the premises of the old Hacienda Mururata, only a few minutes’ walk from the village’s newly repaired main square of the village, are abandoned. But while some remains of the past are slowly disintegrating, the future of the kingdom is taking shape.

Pinedo and Larrea have a son, Prince Rolando. At 26 years old, he is studying law at the Universidad de Los Andes in La Paz, and his prospective role as king is central to his ambitions. “I would like to keep pushing forward to make the Afro-Bolivian community more recognised and visible, the way my father has done until now,” he said.

The wall next to where Pinedo likes to sit in his home is decorated with framed official documents, a family photograph and calendars that show his crowning ceremonies. “And where is the crown now? Can I see it?” I asked.

True to his humility, Pinedo went upstairs and came back with his crown tucked away inside a cardboard cookie box.