Not since the 1970s has there been such an important discovery from the Great War in France. In woods on a ridge not far from the city of Reims, the bodies of more than 270 German soldiers have lain for more than a century – after they died the most agonising deaths imaginable.

Forgotten in the confusion of war, their exact location was till now a mystery – one which the French and German authorities were in no hurry to elucidate. But thanks to the work of a father-and-son team of local historians, the entrance to the Winterberg tunnel on the Chemin des Dames battlefront has been found.

The urgent question is what to do next. Should the bodies be brought up quickly and buried in a German war cemetery? Should there be a full-scale archaeological dig so we can learn more about the conduct of the war and the lives of the men who fought it?

Should there be a memorial, or a museum?

The two governments are still deliberating, but time presses. Because if the tunnel’s location is in theory still a secret, it is a secret that has been badly kept.

When I visited the spot a few days ago, it was to discover that bounty-hunters had been the night before. A three-metre deep hole had been dug near the entrance, and a collection of wartime artefacts – axes, spades and pit-props as well as unexploded shells – left in a heap.

We also found a human ulna – the fore-arm bone.

The looters had not managed to break into the tunnel – that lies even deeper down – and what they found are bits and pieces thrown up in the shell explosion that sealed it off.

But no-one doubts they will be back, because whoever gets into the Winterberg tunnel first will find a treasure trove.

In the spring of 1917 the French launched a doomed offensive to retake the hills that lie in a west-east line a few miles to the north of the river Aisne. The Germans had held the crest along the Chemin des Dames for more than two years, and they had a complex system of underground defences.

Near the village of Craonne, the Winterberg tunnel ran for 300m from the north side of the crest – invisible to the French – and came out to supply the first line of German trenches on the south-facing slope.

On 4 May 1917 the French launched an artillery bombardment targeting the two ends of the tunnel, sending up an observation balloon to get a sight on the north-facing slope.

For once their accuracy was formidable. A shell fired from a naval gun hit the entrance, triggering more explosions from ammunition that was stored there and sending a cloud of acrid fumes into the shaft. Another shell sealed the exit.

Inside, the men from the 10th and 11th companies of the 111th Reserve Regiment were trapped. Over the next six days, as oxygen ran out, they either suffocated or took their own lives. Some asked comrades to kill them.

By a fluke of physiology, three men survived long enough to be brought out by rescuers, just a day before the crest was abandoned to the French. One of them, Karl Fisser, left an account for the regimental history:

“Everyone was calling for water, but it was in vain. Death laughed at its harvest and Death stood guard on the barricade, so nobody could escape. Some raved about rescue, others for water. One comrade lay on the ground next to me and croaked with a breaking voice for someone to load his pistol for him.”

When the French took the ridge, the scene outside would have been of untold chaos and destruction. Digging into the tunnel would hardly have been a priority, so they left it. The Germans retook the Chemin des Dames in a later push, but at that point they had no time either to search for remains.

By the end of the war no-one could say for sure where the Winterberg tunnel had actually been. They weren’t French bodies inside, so it was decided to let them lie – as countless other bodies still lie unfound along the Western Front.

The woods grew back and the shell-holes became mere undulations in ground. Today the spot is popular with dog-walkers.

But a local man called Alain Malinowski could not get the tunnel out of his head. It was out there somewhere on the ridge.

Working on the Paris metro in the 1990s, he travelled daily to the capital and used his spare time to visit military archives in the Château de Vincennes. For 15 years he accumulated descriptions, maps and prisoner interrogations – but to no avail. The landscape had been too badly disfigured by bombardment to make any meaningful comparison.

But then in 2009 he chanced on a contemporary map showing not just the tunnel but also a meeting of two paths that had survived till today. With painstaking care, he measured out the angle and distance and arrived at the spot, now just an anonymous bit of woodland.

“I felt it. I knew I was near. I knew the tunnel was there somewhere beneath my feet,” Alain Malinowski told Le Monde.

For 10 years nothing happened. He told the authorities of his find but they refused to follow it up, either because they did not believe him or because they had no desire to open up a mass war-grave.

Into the story stepped his son Pierre Malinowski, at 34 years old a maverick ex-soldier who once worked for Jean-Marie Le Pen and now runs a foundation in Moscow dedicated to tracing war-dead from the Napoleonic and other eras.

Angered by official obfuscation, Pierre decided to force the hand of the French and German governments by opening up the tunnel himself. This was illegal, but he thought it was worth the punishment.

One night in January last year he led a team that brought a mechanical digger to the spot his father had identified. They dug down four metres, and what they found proved they were indeed at the entrance to the tunnel.

There was the bell that was used to sound the alarm; hundreds of gas-mask canisters; rails for transporting munitions; two machine-guns; a rifle; bayonets and the remains of two bodies.

“It was like Pompeii. Nothing had moved,” said one of the team.

Pierre Malinowski then covered up the hole, leaving the place as anonymous as he had found it, and he contacted the authorities. Ten months later, again frustrated by the slowness of the official response, he went public and told the story to Le Monde.

It is fair to say that Pierre Malinowski is not a popular figure in the archaeological and historical establishments.

They believe he has not only broken the law. Without any authority of his own, and overriding the argument that the dead are best off resting where they are, he has also twisted the arm of government, forcing it either to open the tunnel or at least protect it.

And by his example he has encouraged other go-it-alone excavations – most of which will be conducted for purely mercenary motives.

Official reluctance to proceed with an investigation is clear. Diane Tempel-Barnett, spokeswoman for the German War Graves Commission (VDK), told German radio “to be honest we are not very excited about the discovery. In fact we find it all most unfortunate”.

It is hard to imagine the Commonwealth War Graves Commission taking a similar line if the bodies of 270 UK troops were found. But then World War One is often described in Germany as its “forgotten war”.

In fact efforts are under way now to track descendants of those who died in the tunnel – and with some success. The 111th Regiment recruited men in the Baden region of the Swabian Alps, and nine soldiers have now been identified who died on 4 and 5 May 1917.

“If I can help just one family to trace an ancestor who died in the tunnel, it will have been worth it,” says Mark Beirnaert, a genealogist and Great War researcher.

“What I hope is that the bodies can be brought out and identified by their dog-tags. Then what would be fitting is that they leave this cold eerie tomb and be buried together as comrades.”

That is what happened to the more than 400 German soldiers who were found in 1973, having died in a similar tunnel at Mont Cornillet east of Reims. 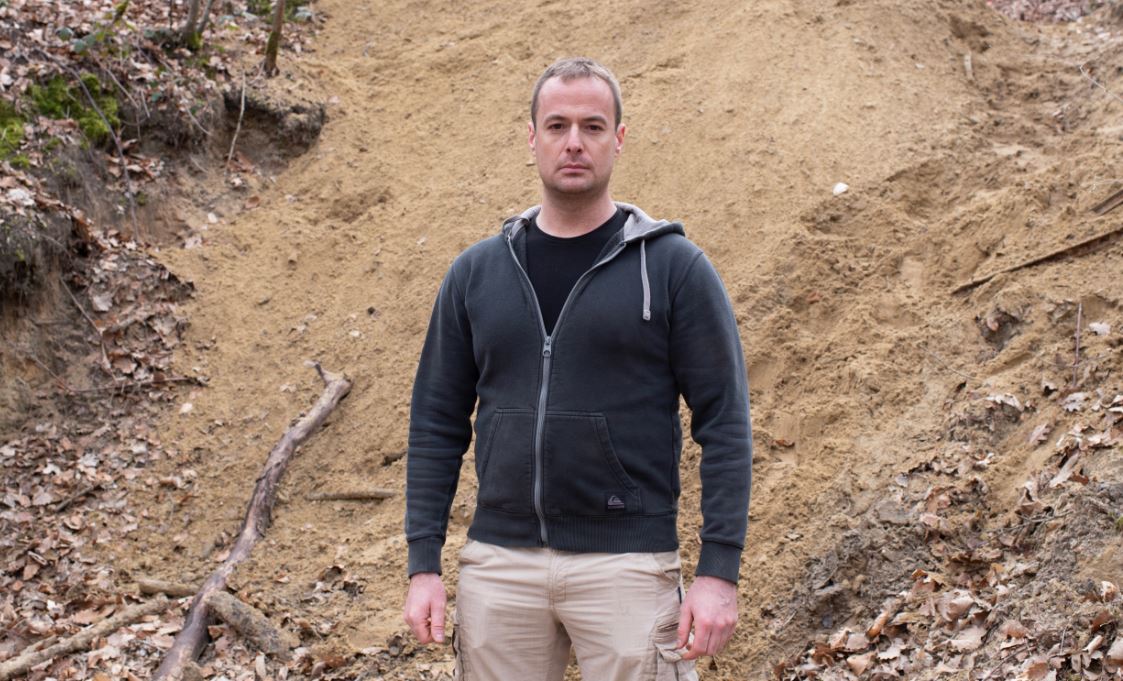 BBCThere will be photographs and letters they wrote in their dying moments to their mothers, fathers and wives. Because they will have hoped that their bodies would soon be foundPierre Malinowski
Historian

Pierre Malinowski also wishes that due honours be paid to the men. “These were farmers, hairdressers, bank-clerks who came willingly to fight this war, and then died in a way that we cannot begin to comprehend,” he says.

He is scrupulous in his respect for human remains. The bodies he has found have been returned to the ground, and he will not let them be photographed. But alongside the soldier’s solidarity, there is also the fascination.

“The bodies will be preserved, so they will be like mummies, with skin and hair and uniforms.

“Remember the tunnel was where these soldiers lived from day to day – so there will be all their normal possessions. Every soldier will have a story. It will be the biggest ever reserve of human material from the First World War.”