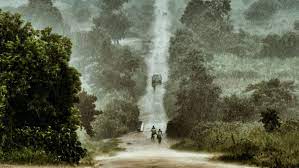 A prison in Malawi realised it was flushing valuable fuel down the drains – now it is using the power of poo to fuel its busy kitchens, aiding both inmates and forests.A

At Mulanje Prison in southern Malawi, convict Felix Chimombo wakes up early every morning to prepare food for his fellow inmates. With a handful other prisoners, Chimombo’s responsibility is to make sure that by 7:00 AM, they have prepared food for 200 or so inmates at the prison. The prison previously used an average of two cubic meters of wood to prepare the day’s food, an arduous process that could last for five hours.

But then came a rather unconventional replacement for the wood. The prison was installed with a biogas digester, a system that converts organic matter – including human waste – into energy. Made from plastic sheets, the system has an inlet that feeds the poop and other waste into a digester, where they are submerged in water. The water creates an anaerobic environment that allows bacteria to break down the biomass into methane, which is pushed through a piping system to the gas stoves in the prison’s kitchen. (Read more about the ways that human waste can be turned into fuel)

Chimombo says the biogas digester has improved conditions for the inmates at the prison. Since the institution was installed with the digester, prisoners are no longer tasked with the tiresome daily routine of chopping firewood.

“The system is very clean and effective,” says Chimombo. And, fortunately, there is no unwholesome smell accompanying the change of fuel. “When the plant was being installed we thought we could be having some sewerage smell in the kitchen, but this gas is very odorless. This initiative has really helped as we no longer take a long time to cook as cooking using gas is quicker and efficient.”

Conditions have improved for the inmates, who have to spend less time preparing firewood for fuel (Credit: Madalitso Wills Kateta)

To ensure that the biogas digester system is managed and maintained, eight prison warders and six prisoners were trained before the digester was officially handed over to the prison, says Esther Mweso, resilience programme manager at United Purpose, the international charity which installed the biogas digester at Mulanje Prison. The technology has also helped to improve the living conditions of prisoners by reducing the frequent blockages of the sewer system.

The prison’s officials say that since the installation of the biogas digester the reformatory has cut its firewood consumption by around half, from 60 cubic metres a month to around 29 cubic metres. The digester has also helped to reduce the electricity bills at the prison, saving an average of MWK 310,400 (£290/$400) each month on firewood and electricity.

So far, the biogas digester is not yet at capacity, as the digester was installed in December 2020 when the prison was reducing the number of inmates in line with Covid-19 prevention measures. At full capacity, the digester could process 230 cubic metres of faecal matter a day. Prison officials are hopeful that as time goes on the digester will help reduce expenditure on electricity and firewood by up to 80%.

In Malawi, biogas digesters have the potential to address several of the country’s environmental problems at once

The biogas digester also produces a slurry by-product that is used as an organic fertiliser on the small farm at the prison, which is helping to boost the production of vegetables. The hope is that this will reduce levels of malnutrition among inmates, particularly for those living with HIV.

Biogas digesters fuelled by human waste have been gaining growing interest from Kenya to Indonesia, where they are particularly useful in remote rural areas. In Malawi, they have the potential to address several of the country’s environmental problems at once: providing clean fuel and fertiliser, while reducing an overreliance on wood.

Biogas can be harnessed from human poo with the help of a simple digester – turning waste into fuel (Credit: Madalitso Wills Kateta)

Malawi is one of the most densely populated countries in Africa, and as much as 97% of the country’s population dependent on biomass for energy, and wood in particular. As a result, the country has one of highest deforestation rates in Sub-Saharan Africa. Malawi’s overall forest cover has declined from 3.5 million hectares of natural forest in 1990, to 2.24 million hectares in 2020 – an area almost half the size of Massachusetts. The country’s indigenous primary forest has been particularly hard hit, declining by 60% from 1.7 million to 700,000 hectares. Besides demand for firewood, the expansion of cultivated land has been putting more pressure on forests.

The project at Mulanje Prison is small, but it is an example of a broader shift away from wood that could help protect Malawi’s remaining forests. Tawonga Mbale, director of environmental affairs at the Ministry of Environment and Natural Resources says that the government of Malawi is promoting several sustainable alternatives.

“We generate a lot of organic waste which unfortunately is not converted into energy to prevent it from polluting the environment,” she says. “The government is encouraging the adoption of environmentally friendly energy sources such as biogas and solar energy.”

Environmental activist Mathews Malata says small biogas solutions are a strong option for Malawi if the country has to reduce pressure on fuels such as charcoal and firewood. “In Malawi we have biogas plants mostly on a small scale but latterly we have seen a rise in investors interested to invest in biogas plants,” he says.

Similar systems are operating at Dedza and Mangochi prisons in central and southern Malawi, as the system works well in large institutions with plenty of people to provide the fuel. But such a large facility isn’t practical for individual homes, most of which also rely on firewood for fuel. Mweso is hopeful that a smaller version could be used for households, and a design is being trialled for this use.

As well as biogas, the digester produces a slurry that can be used to fertilise Mulanje Prison’s vegetable garden (Credit: Madalitso Wills Kateta)

In Lilongwe, Malawi’s capital, waste is already being used to generate gas for households in other ways – not from human waste, but general household waste.

“We collect mixed garbage from households and after separating the biomass from plastic waste we feed the biomass into the digester where we produce gas and a liquid all-purpose fertiliser,” says Rose Muhondo, a hygiene and sanitation promoter at Our World International, a local non-government organisation. OWI is selling its biogas at trial cost of MWK 950 (£0.87/$1.20), per kilogram – roughly half the price of liquefied natural gas in the country.

Whether it is poo, food waste or discarded crops, much of the energy Malawi needs to take pressure of its forests could already be much closer to home than we think.