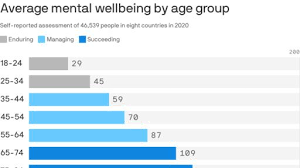 CALIFORNIA (Axios): A new survey of people in eight countries finds that mental wellness took a dive in 2020, with the worst effects found among the young.

Why it matters: Few people’s mental health escaped unscathed from the effects of the pandemic, but the gap between the state of the young versus older adults could mean serious problems down the road.

What’s happening: Earlier this week, Sapien Labs — a nonprofit that works to understand the human mind — released its 2020 Mental State of the World report.

The report compiles tens of thousands of responses from eight English-speaking countries, including the U.S., to provide a snapshot of what Sapien founder Tara Thiagarajan calls “mental wellbeing — the full breadth of your emotional and social and cognitive function and capability.”

By the numbers: Not surprisingly, given… everything, the overall mental wellbeing score dropped significantly in 2020 from the year before, with the percentage of respondents falling into the clinical risk level rising from 14% in 2019 to 26% in 2020.

Notably, though, the crisis was particularly pronounced among young adults aged 18–24, nearly half of whom reported clinical levels of risk, compared to 6% for those 65 and over.

What they’re saying: “What we’re seeing is kind of terrifying,” says Thiagarajan. “44% of young people are experiencing symptoms of such severity that they find in a big challenge to function effectively in life.”

Yes, but: School closures and early job losses took a particularly profound toll on the young during the pandemic — which hopefully won’t be repeated — and it’s possible the high levels of mental wellbeing in older people shows that we can gain emotional resiliency as we age.

Because the survey was only in English and accessed over the internet, it may not be fully representative of the countries’ populations.

The bottom line: Still, notes Thiagarajan, the results are a warning sign for the future.

“If this group comes into middle age and instead of having an average of 15% with mental health issues you instead have 40%, that’s a fundamentally different society,” she says.