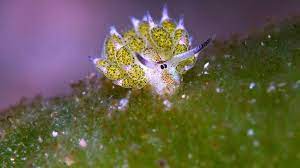 Much like its herbivorous namesake, the ocean-dwelling “leaf sheep” grazes for food; however, it supplements its diet in a unique way: through the power of the sun.

“The first time I saw Shaun the Sheep in Romblon [in the Philippines], I was surprised by how tiny it was,” said Ara Juan, an avid diver and ocean advocate. “The second time in Dauin, [in the province of] Negros Oriental, was more exciting – I saw five of them perched on a leaf, so it looked like they were grazing on a field of algae.”

People are captivated by the leaf sheep

“Shaun the Sheep” is what many divers in the Philippines affectionately call a curious sea creature known as the leaf sheep (Costasiella kuroshimae) due to its similarity to the animated lamb. Contrary to what its name suggests, the leaf sheep is neither leaf nor sheep – it’s a sea slug.

“They’re delicate creatures and their bodies are like shell-less snails,” said Genevieve Reyes, a diver and photographer. “Leaf sheep don’t hide or retract when they feel your presence. They have a routine life, circling the leaf of an algae and grazing about in their own little world.”

This marine invertebrate has black beady eyes situated close together, rhinophores with black tips resembling sheep’s ears or insect antennae sticking out of its white head and dotted green cerata popping out of the upper surface of its body. The sea slug’s cerata are leaflike appendages akin to an aloe vera plant or a zebra succulent but typically with pink, purple or white tips, and they contain branches of digestive gland. Meanwhile, rhinophores pick up chemical signals in the water, giving the sea slug its sense of smell and enabling it to find food sources.

“People are captivated by the leaf sheep because it has a cute face and an interesting shape,” said Terrence Gosliner, senior curator of invertebrate zoology and geology at the California Academy of Sciences and a sea slug expert who has focused most of his research on the myriad species found in the Philippines. “They’re just great little slugs.”

And little they are, growing to a maximum length of seven or eight millimetres upon adulthood and living between six months and a year. According to Gosliner, leaf sheep are hermaphrodites (having both male and female reproductive organs) and must mate with another individual to produce an egg mass. “The eggs hatch into shelled larvae that spend a week or two in the plankton. Then, they discard their shells and begin their life as a small slug,” he said.

Leaf sheep live on Avrainvillea, a fuzzy, felty type of algae growing in areas with soft substrates, such as silt or fine sand. “They’re not found in coral reefs but in areas next to coral reefs,” Gosliner said. “The leaf sheep spends its whole life on that species of algae, and you can often see a whole colony of them there – I’ve seen up to 15 or 20 on one blade of alga. Sometimes, you can see the egg mass of the slug, which are tiny spiral coils.”

The Avrainvillea is not only the sea slug’s home, but also its source of nourishment. As a species of Sacoglossa, or “sap-sucking” sea slug, the leaf sheep grazes (much like its herbivorous namesake) on the algae, sucks its chloroplasts (structures within the algae’s cells that contain chlorophyll, a green photosynthetic pigment) and keeps them within the tissues of its cerata for up to 10 days, a process called kleptoplasty. Doing so allows the leaf sheep to supplement its diet through photosynthesis, which is generally known to be performed only by plants. This photosynthetic ability has earned the leaf sheep its title of “solar-powered sea slug”.

“It’s one of the few multicellular organisms that can do it,” said Miguel Azcuna, assistant professor at Batangas State University in the Philippines and head of the university’s Verde Island Passage Center for Oceanographic Research and Aquatic Sciences (VIP CORALS). “Imagine you ate a salad and kept the chloroplast from it in your digestive system, so you just need to put yourself under the sun to make food. It’s convenient for survival.”

Leaf sheep are not in critical danger, but they still face threats to survival, including habitat loss. Practices such as illegal fishing and destructive fishing (using dynamite or cyanide, for instance) destroy marine habitats and kill the animals living in them. While these practices have been outlawed in the Philippines, illegal fishing and destructive fishing still persist in the country.

Climate change, too, is impacting the sea slug’s habitat. More intense storms and typhoons – the Philippines gets an average of 20 each year – brought about by a warming world could damage marine areas, with strong waves and currents creating whirlwinds of sand that could dislocate leaf sheep and uproot the algae they live in. Warmer and more acidic oceans could also alter the animal’s behaviour, as demonstrated in a study on its cousin, the sea hare, which had less foraging success and made poorer decisions when exposed to simulated ocean acidification and warming.

Plastic pollution poses another risk to the species. “Sometimes, as part of my dive, I’ll end up picking trash underwater,” Juan said.

More than a third of the Philippines’ 1.9 million metric tons of mismanaged plastic waste ends up in the ocean, making the nation the third-largest contributor to global marine plastic debris. Ingesting microplastics could obstruct a leaf sheep’s mouth or accumulate in its digestive tract, and the chemicals leaching out could be harmful to its health.

To combat the growing threats to its marine environments, the Philippines has designated certain habitats as marine protected areas (MPAs). Maricaban Island in Batangas, for instance, was declared an MPA in 2019, limiting fishing activity and involving the community in monitoring reef health and keeping the shoreline trash-free.

Community-based fisheries and environmental law enforcement initiatives are also in place. This includes “Bantay Dagat“, wherein volunteers across the country serve as guardians of the sea, patrolling it for illegal fishing activities.

Non-government organisations across the Philippines are helping too. Azcuna’s team at VIP CORALS partnered with the SEA Institute (where Gosliner serves as a director) to conduct eco camps by the sea, educating students living in coastal communities around Batangas about the importance of marine ecosystems. Many dive resorts and operators also conduct regular beach and dive site clean-ups to collect rubbish and other plastic waste on the shore and underwater.

The leaf sheep was first discovered in 1993 in the Japanese island of Kuroshima, but it’s also widely distributed across Asia, with sightings in Singapore, Thailand and the Coral Triangle, an area regarded as the world’s epicentre of marine biodiversity encompassing the waters of Indonesia, Malaysia, the Philippines, Papua New Guinea, the Solomon Islands and Timor-Leste.

Within Philippine waters, leaf sheep have been found in the country’s northern, central and southern regions – from the coral-covered crevices of Anilao in the Batangas province of the Luzon region to the muck-filled bottoms of Dauin in the Negros Oriental province of the Visayas region and the volcano-like slopes and reefs of the island province of Camiguin in the Mindanao region. The best time to visit is during the months of December to May when waters are calm and the typhoon season has ended. You can reach most dive sites by riding an outrigger boat called a bangka, but some dive resorts have a “house reef” in front of them.

You’re just a visitor to their home, so respect the marine environment

Because leaf sheep undergo photosynthesis, they can be found between nine and 18m beneath the ocean where sunlight can still penetrate. Yet the sea slugs might be difficult to find owing to their minute size. “It would help if you have a spotter with you – a local dive guide who knows where to find them in a specific dive site,” Juan said.

To ensure responsible diving, Juan’s advice is to practice proper buoyancy to avoid hitting any corals or creatures and disrupting the habitat, as you’ll have to get close up to the leaf sheep in order to see them. You might also encounter rubbish when diving, so pick up what you can and make sure to dispose of it properly after your dive. Not touching or removing plants and animals is also crucial.

“Leave it how you saw it,” said Juan. “You’re just a visitor to their home, so respect the marine environment.”