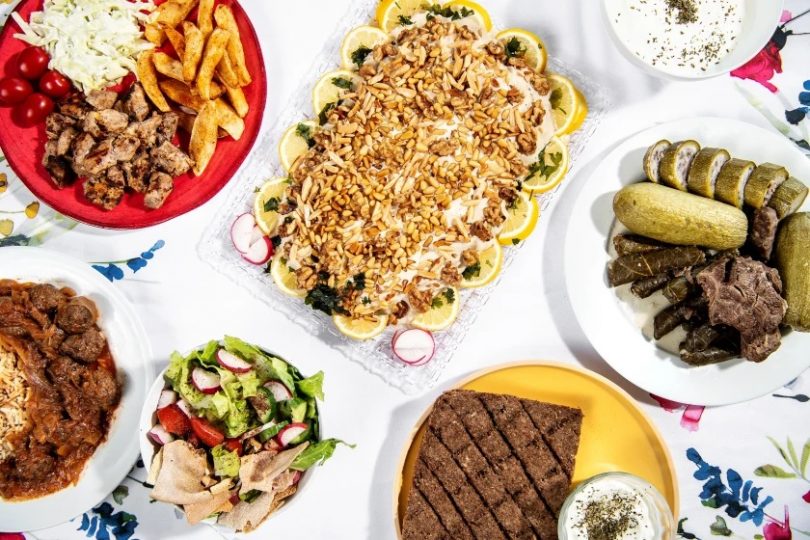 Stuffing vegetables is a sacrosanct category of Lebanese cuisine. Cooks heap hollowed eggplants, peppers and squash, or fold cabbage and grape leaves into tight packages, with several traditional fillings: rice and meat (lamb is common too), or an herbed vegetarian grain mixture, or ground meat sautéed with pine nuts in generous amounts of butter.

Georges has the medium mastered. She uses a long, fine coring tool called a man’ara to carve out the zucchini’s pulp; its inner walls are whittled to a quarter-inch. The koussa simmers to softness in light tomato sauce but remains structurally sound. Just enough stuffing goes in so that the rice, as it cooks, balloons to keep the squash from collapsing inward. You can smell the sweet, peppery allspice that scents the beef before your first forkful.

Served over vermicelli rice with a side of smoky baba ghanouj, stuffed zucchini is among the two dozen Lebanese comfort foods that Georges and her family rotate through a weekly-changing menu tailored for pickup and delivery. They call their takeout-only operation Mama Lina Cooks, and they’ve been finding their audience via Instagram (and deservedly strong word-of-mouth) over the last year.

As with the recent pandemic-era pop-ups and other liminal projects, this one began as a way to reaffirm a sense of purpose in the midst of tragedy. Mama Lina Cooks was the brainstorm of Georges’ son Fouad, a designer and entrepreneur who moved to Los Angeles five years ago. His two brothers live in the city as well. When their parents would visit from the suburbs of Beirut, Lina wondered about staying in Southern California to be near her family, and she would ask aloud what she might do with herself here.

“You’d open a restaurant and cook!” Fouad would half-joke. Lina wasn’t a professional chef, but she was known for her nafas — the Arabic word (it translates as “breath” but can connote “spirit”) used to describe home cooks who, with their hands and heart, make remarkable dishes that others find difficult to duplicate.

Then came the explosion in the port of Beirut on Aug. 4, 2020, caused by 2,750 tons of ammonium nitrate that had been confiscated from a ship six years earlier and stored negligently. The blast flattened neighborhoods, destroyed homes, killed more than 200 people and injured thousands. It ripped through the city’s already torn spirit and economic seams.

(The dire situation in Lebanon, wrought by decades of political corruption and infighting, has grown even worse over the last year. The currency has lost 90% of its value from two years ago. Fuel, electricity and medication shortages shape daily lives; staples like bread are scarce. “There is no respite or safe place anywhere,” Lebanese writer Lina Mounzer wrote of life in Beirut in a recent New York Times op-ed.)

Lina and her husband flew to Los Angeles a month after the explosion. “I’d never seen my parents so broken,” Fouad told me in an interview. “I felt like I had to do something to help them snap out of their suffering, to feel productive, get busy, meet people.”

Lina was starting to cook for Fouad’s friends. Early last November, the two of them sat down and planned out a week of meals. What would happen, Fouad asked, if he surveyed the local Lebanese community to gauge interest? What if he made a logo and started posting menus on social media?

The lineup for Mama Lina Cooks has changed weekly since then. Menus are posted on Instagram and Facebook; customers fill out an order form by Saturday night for the following week and then either pick up their meals in Hollywood Hills or opt for delivery, which Fouad usually offers on Tuesdays.

Koussa, which has proved since last fall to be one of Lina’s most requested dishes, might be the dish of the day on a Tuesday. Monday could bring kibbeh bil saniyeh — a baked dish of layered spiced ground beef and bulghur with pine nuts, always served with a healthy dollop of yogurt — that’s a favorite Lebanese comfort food. For Wednesday: m’lookhiyeh, a calming stew of slippery jute leaves and threads of chicken sharpened by red onions steeped in vinegar. On Thursday: samke harra, fish cloaked in thick and lemony tahini sauce among handfuls of cilantro, pine nuts and walnuts, with a side of crunchy fattoush. Friday: shish barak, meat dumplings browned and then warmed in garlicky yogurt sauce.

These dishes come from the home-kitchen tradition, which is what makes Mama Lina Cooks particularly worth seeking out. As with many cultures, Lebanese cuisine has specific repertoires of foods traditionally eaten in public spaces and those shared with family in private. Falafel, shawarma and other street-food staples, and the elaborate spreads of restaurant mezze (cool dishes like tabbouleh and hummus followed by skewered meats or grilled seafood, among many possibilities), are mirrored on Lebanese restaurant menus throughout Southern California. The gamut of soothing vegetable-based stews and fragrant one-pot rice dishes is rarer to find consistently out in the world.

It’s succor we could all use these days. That includes herbivores: Fouad is vegan, and Lina has learned that Beyond Meat makes a fine substitute for the ground beef in many recipes.

If I’m sharing a meal with friends, I’ve taken to supplementing the plat du jour with a dish or two sold in larger portions from Mama Lina Cooks’ catering menu (which lives in the story highlights on its Instagram page). I might pad samke harra with tabbouleh — bracing from its lemony dressing and correctly served with tapered romaine leaves for scooping — and laban emmo, boneless hunks of lamb shank warmed in yogurt sauce and served over rice. I keep an eye out for when Lina makes knafeh, the pastry of stretchy cheese and crackling dough; it’s often eaten for breakfast in Lebanon but also makes for an emotionally rewarding dessert.

And in the way of homey cooking, relishing the leftovers can be part of the pleasure. My closest Lebanese friend came to visit last month and we ate a feast from Mama Lina Cooks: koussa, m’lookhiyeh and a tray of kibbeh bil saniyeh. She ate happily but quietly (I could see these familiar foods brought to mind home and the ongoing catastrophes) and then she went to the kitchen to help clean up.

“I’m cutting the rest of this kibbeh into single servings,” she said over her shoulder. “Every Lebanese person keeps kibbeh bil saniyeh in their freezer for a last-minute meal. Now you will too.”

It seemed a higher compliment to Lina’s cooking than I could ever give.