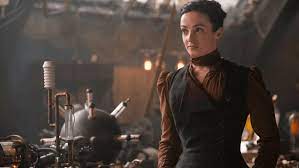 From The Nevers to Mare of Easttown and the return of The Handmaid’s Tale, Eddie Mullan picks the programmes worth seeing this month.

Kate Winslet’s first TV role in a decade sees her reunite with Guy Pearce, her co-star in 2011’s HBO series Mildred Pierce. The crime drama features a strong supporting cast which includes Julianne Nicholson, Jean Smart and Evan Peters. Set in the titular Pennsylvania town, the story follows detective Mare Sheehan (Winslet), as she investigates the murder of a local girl while also trying to deal with her own personal traumas.

Grief-stricken after her son’s suicide, Mare becomes fixated with cases of missing and murdered girls in Easttown. But with rumours swirling about Mare in the close-knit community, how will this affect her attempts to solve the case? Watch the trailer here. Premieres 18 April on HBO Max and 19 April on Sky Atlantic/Now TV.

Young adult author Leigh Bardugo’s Grishaverse books are brought to life by Arrival writer Eric Heisserer in an eight-part epic fantasy series on Netflix. Set in the Tsarist Russia-inspired nation of Ravka, it follows orphan mapmaker Alina Starkov (Jessie Mei Li), who has an extraordinary power to summon light that could be the key to setting her war-torn country free from the monstrous threat of the Shadow Fold – a region of pure darkness within Ravka filled with nightmarish creatures.

Leaving everything she knows behind, Alina joins an elite army of magical soldiers known as Grisha – but as she struggles to hone her power, Alina quickly discovers that friend and foe can be one and the same. Watch the trailer here. Premieres 23 April on Netflix.

Set in Victorian London, this HBO sci-fi follows the story of a supernatural event that affects certain people – mostly women – who one day wake up with unusual, charming or sometimes disturbing abilities. However, all who belong to this new group known as the Touched, possess powers that place them in imminent danger from enemies who wish to control them.

Mysterious widow Amalia True (Laura Donnelly), and young inventor Penance Adair (Ann Skelly), both members of the Touched themselves, shelter the gifted outcasts in an orphanage to keep them safe from brutal forces determined to annihilate their kind. Screenwriter Philippa Goslett, who co-wrote 2018 film Mary Magdalene among other things, took over as showrunner after its creator Joss Whedon stepped down from the production in 2020. Watch the trailer here. Premieres 11 April on HBO Max and 17 May on Sky.

It looks like all-out war is headed to Gilead, in season four of the dystopian drama based on Margaret Atwood’s 1985 novel and set in a totalitarian society in what was formerly the United States. The new series picks up where we left off with June Osborne (Elisabeth Moss), on the run with her fellow handmaids, after secretly helping a plane full of Gilead’s children escape to Canada.

This marks June as Public Enemy No 1 in Gilead, and Commander Fred Waterford (Joseph Fiennes) and others remain hellbent on her capture. The risks June takes in her continued fight for freedom will bring unexpected and dangerous new challenges, while her desire for justice and revenge threaten to destroy her most cherished relationships. Watch the trailer here. Premieres 28 April on Hulu.

Amazon’s new anthology horror series from writer Little Marvin and producer Lena Waithe promises to explore stories of terror in America, with each chapter travelling to a different time and place. The first season tells the story of a black family in the 1950s who move from North Carolina into an idyllic-looking Los Angeles neighbourhood. Except everything isn’t what it seems on tree-lined Palmer Drive.

In an all-white neighbourhood of Compton, the home of Lucky (Deborah Ayorinde) and Henry Emory (Ashley Thomas) becomes ground zero. It’s here, where they should feel safest, that hostile forces – both real and supernatural – taunt and threaten to destroy them. Watch the trailer here. Premieres 9 April on Amazon Prime Video.

The story introduces us to brilliant inventor Allie Fox (Theroux), a radical idealist who suddenly finds himself on the run and seeking a safe haven from the US government. Disgusted with corruption in his country, Fox travels to Mexico with his family in tow to find a place to start over ­–­ but getting there will involve a dangerous journey. Watch the trailer here. Premieres 30 April on Apple TV+.

Fans of crime-writer extraordinaire Harlan Coben will be pleased to know that, following the success of The Stranger, Safe and The Woods, here comes another twisty Netflix thriller devised by the author. This one is an adaptation of his 2005 novel of the same name, that switches the setting from New Jersey to Spain. One night, Mateo (Mario Casas), intervenes in a fight and winds up a killer. Now, nine years later, he’s trying to start from scratch, but is taking nothing for granted with his wife Olivia (Aura Garrido).

With Olivia pregnant, the two of them are about to get the house of their dreams. But a shocking call from Olivia’s phone while she’s on a business trip unsettles Matt, beginning a race to discover the truth. His innocence will be questioned again, this time by Lorena (Alexandra Jiménez), a police inspector investigating a suicide case. Watch the trailer here. Premieres 30 April on Netflix.

Written by actor brothers Brian and Domhnall Gleeson and Michael Moloney, this Channel 4 and Amazon Studios comedy series co-production tells the story of 32-year-old slacker Frank Marron (Brian Gleeson), who thinks the world owes him something. Living in Dublin with his mother Mary (Pom Boyd), Frank is a musician who hasn’t written music or played a gig in years since splitting with his girlfriend Aine (Sarah Greene). Meanwhile Frank’s wingman is Doofus (Domhnall Gleeson), who foolishly thinks they are best friends but has his hands full clearing the debris left in Frank’s wake. What follows is one man’s hapless search for respect, as he struggles to grow up and get his life together. Watch the trailer here. Premieres 15 April on Channel 4 in the UK and 16 April on Amazon Prime Video in the US.