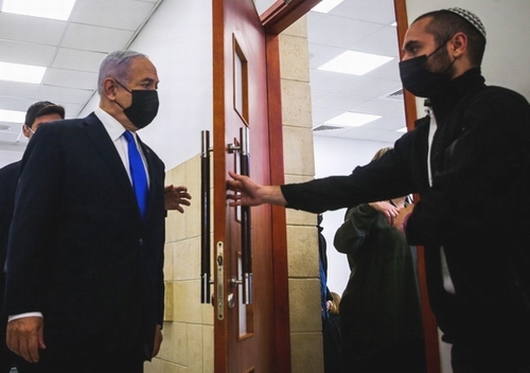 TEL AVIV: As the first witness in Israeli Prime Mi-nister Benjamin Netanya-hu’s corruption trial took the stand on Monday, President Reuven Rivlin was consulting with representatives of Israel’s political parties as to who should form the next government.

Why it matters: This split-screen moment between the Jerusalem district court and the president’s residence encapsulated the political and legal crisis that has engulfed Israel over the last two years. The crisis appears likely to continue now that a fourth election has ended with no clear winner.

Driving the news: Netanyahu was on hand this morning to listen to the opening statement of the lead prosecutor in his case, Liat Ben-Ari. The prosecutor arrived with a security detail due to death threats against her.

Ben-Ari said the main charge against Netanyahu is that he abused his power as prime minister to receive personal and political benefits from media tycoons.

In return for favorable regulatory policies, the prosecutor alleged, Netanyahu asked the tycoons not for money but for something of critical importance to him: favorable media coverage, including in the run-up to Israel’s 2015 election.

Meanwhile, Rivlin was in the midst of consultations over who should receive a mandate to form Israel’s next government. The two main contenders are Netanyahu and opposition leader Yair Lapid, whose parties finished first and second, respectively.

Rivlin told the representatives of the various parties that he doesn’t think either Netanyahu or Lapid will be able to win enough support to form a government and stressed that there’s a real risk of a fifth consecutive election.

Rivlin also raised for the first time the possibility of denying Netanyahu the mandate due to his corruption trial.

In a meeting with representatives of Netanyahu’s Likud party, Rivlin said he might have to consider “morals and values” before offering the mandate, but stressed that he didn’t know whether such a determination should be made by him, the Supreme Court or the Knesset.

The state of play: The first witness who took the stand today was Ilan Yeshua, the former CEO of Walla News, one of Israel’s largest news websites. Yeshua is the key witness in “Case 4000,” in which Netanyahu was indicted for bribery.

According to the indictment, Netanyahu gave regulatory benefits worth more than $300 million to Shaul Elovitch — who owned Walla News as well as a major telecom firm — in return for Elovitch tilting the site’s coverage in Netanyahu’s favor and using it to attack his political opponents.

Yeshua gave the police a mountain of evidence, including audio recordings, text messages and WhatsApp exchanges that show how Elovitch allegedly ordered him to shape the coverage every time his telecom company needed regulatory approvals from Netanyahu.

In his testimony today, Yeshua said he felt like he was in North Korea and used to call Netanyahu and his wife “Kim and Ri” — the names of the North Korean dictator and his wife. He said that Netanyahu intervened in Walla’s coverage more in one week than all other Israeli politicians put together had in a decade.

“They [Elovitch and his wife] told me they don’t care about journalism but about Netanyahu signing off on their business interests. I was told that if Sara Netanyahu gets mad, Benjamin Netanyahu will get mad and won’t sign,” he said.

What’s next: Yeshua’s testimony is expected to continue for at least two or three more sessions. He is only the first of more than 300 witnesses who are expected to testify in the trial, which will convene three days a week.

What’s next: Rivlin is expected to hand the mandate to Netanyahu or Lapid by Wednesday, and he could even announce his decision on Tuesday after the new Knesset is sworn in. Whoever is chosen will have 28 days to try to form a government.