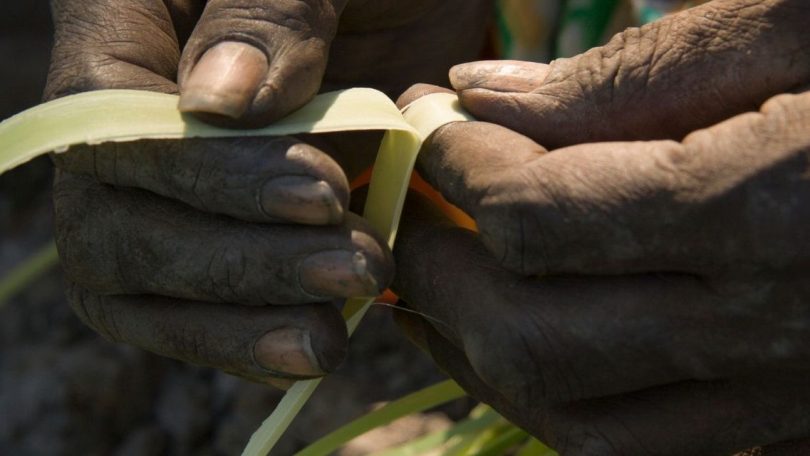 Native Australian flours are being touted as the next big thing in sustainable baking. But the revival of ancient grains could have a much bigger impact than making sandwiches tastier.

Mastering the art of making sourdough will be remembered as one of the biggest culinary trends of the Covid-19 era. But as home cooks around the world focused on producing Instagram-worthy loaves, Australian researchers were busy testing the viability of producing ancient grains for mass consumption – an experiment that could have implications for everything from food security to reconciliation.

“See these seeds?” said Arakwal-Bundjalung woman Delta Kay as she gently cradled a seed head protruding from a Lomandra longifolia (spiny-headed mat-rush) plant growing near a popular surfing beach. “Bundjalung people would grind these up to make flour for baking a flat biscuit in hot ashes.” The long, strong leaves, she added, were dried out and used for weaving baskets.

This knowledge, which Kay shared with me on the Aboriginal walking tour she hosts in Byron Bay, in northern New South Wales, dates back tens of thousands of years. Yet it wasn’t until recently that Indigenous traditions of harvesting nature’s bounty, passed down over generations, have begun to reshape common views about how the nation’s first people lived – and cooked – prior to colonisation.

Detailing the advanced Aboriginal agricultural practices documented by white settlers, Bruce Pascoe’s 2014 book, Dark Emu, effectively “cancelled” the theory that Indigenous Australians led a simple hunter-gatherer lifestyle. Indigenous Australians were among the world’s first agriculturalists, Pascoe told me from his farm on Yuin Country near Mallacoota in eastern Victoria. What’s more, the 1990s discovery of a grinding stone in Cuddie Springs in north-west New South Wales dated to be at least 30,000 years old – followed by the 2015 discovery of a grinding stone in Arnhem Land in the Northern Territory found to have been used 65,000 years ago – has made him “certain” that Indigenous Australians were the world’s first bakers.

This ancient culinary staple is making a comeback

“The signs indicate that these grinding stones were used to make flour,” said Pascoe, who has Aboriginal ancestry. “And that’s the first time in the world that grass seeds had been turned into flour by many thousands of years.”

Even before the Arnhem Land discovery, said Pascoe, “The Cuddie Springs grinding stone showed that Ngemba women [the local Aboriginal clan] were making bread from seed 18,000 years before the Egyptians.”

Native crops once thrived in Australia, particularly in arid regions, and were once skilfully managed by Indigenous Australians using techniques such as controlled burning (a practice now being harnessed to manage Australia’s notorious bushfires). But crops including grasses, the seeds of which were harvested to make flour, were decimated by the removal of Aboriginal people from their ancestral lands and the introduction of cattle.

“The first explorers and pioneers that went into those regions wrote about grasses higher than their saddles, but they don’t exist in many of those places anymore,” said Pascoe.

While native Australian foods have enjoyed a surge in popularity in recent years, native grasses and other plants that can be used to make flour are still viewed by many non-Indigenous Australians as weeds. But with the help of modern science, this ancient culinary staple is making a comeback.

While studying introduced crops for heat and drought tolerance at the University of Sydney’s agricultural research station on Gamilaraay Country in north-western New South Wales, agricultural scientist Angela Pattison began to wonder if hardy native grasses had the potential to become a sustainable food source in the face of Australia’s worsening droughts, which saw the nation’s 2019/2020 grain harvest – and exports – shrink to decade lows.

“I read Bruce Pascoe’s book, and I thought, wouldn’t it be great to see if we could get a paddock-to-plate production system working in a modern context,” Pattison said.

Conducted in collaboration with Pascoe – who has experimented with native grains with his own Indigenous social enterprise, Black Duck Foods – along with Gamilaraay Traditional Owners (local Aboriginal custodians) and local farmers, a one-year feasibility study led by Pattison found that native millet, or panicum, had particular promise to be grown commercially.

“The native millet was the easiest to grow, harvest and turn into flour, and it’s significantly more nutritious than wheat,” said Pattison. “It’s also high in fibre and gluten free. And it tastes good. It just ticks so many boxes.”

Researchers also found that native grasses have myriad environmental benefits. As perennials they sequester carbon, preserve threatened habitats and support biodiversity. This wasn’t exactly news, however, to the descendants of Australia’s first farmers – for whom the revival of native grains has more than just environmental and potential economic benefits.

As part of the study, Pascoe joined Pattison and Gamilaraay Traditional Owners at a series of “johnny cake days” to test how various native flours held up in an Indigenous flatbread cooked over hot coals. For Rhonda Ashby, a Gamilaraay woman who has been recognised for her work helping Aboriginal people re-engage with language and culture, it wasn’t just an opportunity to break bread with her kin, but also to heal.

“We’ve lost a lot of knowledge though our colonisation,” said Ashby. “So, bringing back this traditional practice, being able to cook with our traditional ingredients, is really important for our wellbeing.”

“The people of western New South Wales are known as the river and grass people, and these native grasses carry important Songlines [ancient wayfaring routes across the landscape, passed down over generations by story and song] like the Seven Sisters Songline, which is one of the biggest Songlines in Australia for First Nations women,” Ashby said.

It’s high in fibre and gluten free. And it tastes good. It just ticks so many boxes.

The Indigenous word for bread varies between language groups (there were more than 250 Indigenous languages spoken in Australia at the time of colonisation), but in English, rustic-style bread cooked in fire is most commonly known as “damper”. The word is thought to have been derived from the breadmaking technique used by a man who arrived in Australia on the First Fleet in 1788 named William Bond, who made bread in his Sydney bakery by “damping” the fire then burying the dough in the ashes. The method was later popularised by drovers, as the simple ingredients (white flour and salt) could be carried on long journeys without spoiling.

It wasn’t long before the term “damper” was immortalised in popular culture by the likes of colonial-era bush poet Banjo Paterson. Unfortunately, so too was the British recipe. By the early 19th Century, government rations for Indigenous Australians amounted to 1lb of white flour, two ounces of sugar and half an ounce of tea per day. These highly processed, low-nutrient foods wreaked havoc on Indigenous health. Even today, Aboriginal and Torres Strait Islander people are 4.3 times more likely to suffer from Type 2 diabetes than non-Indigenous Australians.

Despite the many benefits linked to the revival of native grains, researchers acknowledge there are still hurdles to overcome before native flours could become mainstream. “For one, the yield of native grains is low compared to introduced crops, and to produce any type of grains you need to be able to do it on a large scale to make it worthwhile,” said Pattison.

Pascoe, who along with Pattison supports Indigenous leadership of the development of a native grains industry, said the acquisition of land is a continuing struggle for Indigenous Australians, whose traditional land management practices have also been historically undervalued.

“Whole tracts of land are now unfarmable in Australia because of the damage caused by sheep,” said Pascoe. “So, let Aboriginal people have a crack. Let us into this industry as a form of social justice as well as economic good sense.”

In the meantime, Indigenous Australian bread and breadmaking traditions can be experienced on Indigenous tourism tours around the country. With different plants, techniques and tools traditionally used to extract flour from region to region, there’s always something new to learn.

Before heading into the mangroves of Far North Queensland to try my hand a spearing a mud crab with Walkabout Cultural Adventures, I fuelled up on fresh damper baked by company owner Juan Walker’s mother Louise.

“She uses regular flour, but traditionally Kuku Yalanji people used many native seeds and grains to bake, such as black bean, black wattle and pandanus seeds,” Walker explained. “Some ladies still practice the treatments required to remove toxins [in the plants], but mostly for passing on knowledge.”

On a tour of the Northern Territory’s Arnhem Land with Adventure North Safaris, my guide pointed out deep grooves in a rocky outcrop made by grinding native grass seeds hundreds – maybe thousands – of years ago. And in his latest book, Loving Country, a lyrical travel guide to Aboriginal Australia, Pascoe touches on various places where people can experience Aboriginal baking traditions, including Brewarrina (near Cuddie Springs), best known for its ancient fish traps.

Chefs around Australia are also reviving Indigenous breadmaking traditions. Chief among them is New Zealand-born celebrity chef Ben Shewry, an advocate for the development of Indigenous-owned native food production, who has brought various iterations of native grains to the menus of his lauded Melbourne restaurant Attica.

“They’re incredibly versatile,” said Shewry. “Take wattleseeds for example – not only are they amazing ground into flour for bread, but they are also amazing boiled like barley or soaked and steamed like rice.”

Sailors Grave Brewing in Orbost in eastern Victoria has even turned native grains into beer, which you can sample at its Slipway Lakes Entrance cellar door nearby. Brewed with native grass seeds harvested by Pascoe and roasted by a local bakery, the dark larger is – fittingly – called Dark Emu, after Pascoe’s groundbreaking book.

Like many non-Indigenous Australians, I have spent many a camping trip cooking damper on an open fire, unaware until recently that the tradition went back much further than Banjo’s poems. So, the next time I sink my teeth into the warm, fluffy goodness of freshly baked damper drizzled with bush honey, I’ll be paying my respects to the first Australians who invented it.

And forget sourdough. If native flour hits the supermarket shelves, I’ll be giving what’s likely to be the world’s oldest bread recipe a whirl.