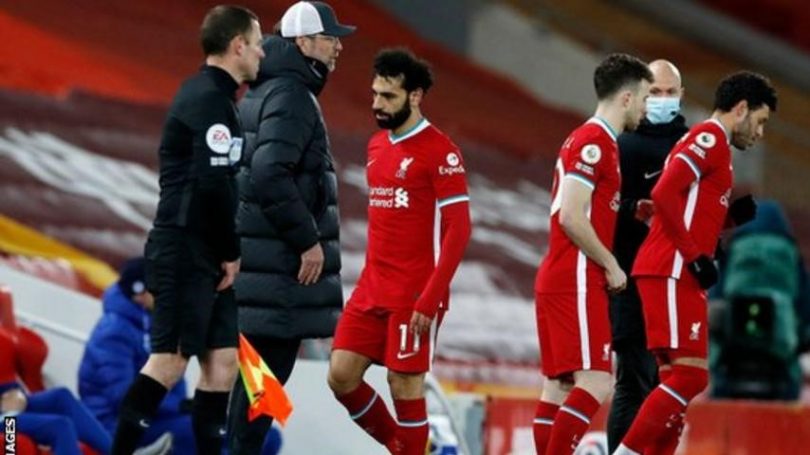 Liverpool manager Jurgen Klopp does not believe a failure to finish in the Champions League places this season would lead to the exit of leading players from Anfield in the summer.

The Premier League champions suffered a fifth home defeat in a row on Thursday when they were beaten 1-0 by Chelsea.

Mohamed Salah looked frustrated when he was substituted in the loss, as the Reds fell four points off the top four.

“I know we have loyalty from the players,” said Klopp.

“It isn’t a situation where a player in the squad says, ‘we are not in the Champions League so I have to leave’. That will not happen. I know them well enough to know that.”

Asked about Salah’s reaction to being taken off, Klopp added: “We are 1-0 down, that makes no player happy. You go off and you react in different ways because you are not happy.

“In the situation when you make a decision like that he looked, for me, like he felt the intensity. He probably saw it completely differently and that is completely fine.”

Liverpool, who lead RB Leipzig 2-0 heading into next week’s last-16 second leg, won the Champions League two seasons ago and have played in Europe’s elite club competition for the last four seasons.

However, five of their six European campaigns prior to that were in the Europa League but Klopp dismissed suggestions that failure to secure Champions League football for next season could lead to a lengthy spell out of the competition.

He added: “This club will not be a regular out of the Champions League – this year is difficult, we know that, but the potential and the power of the club is a completely different one.

“I do not know the team 10 years ago but we are ready for a battle in this era, and with the team we have together.

“Seasons have momentum and we never really got it this year, that is true, but this club is in a really good position.

“In a difficult time obviously, but in a better position than other clubs I would say.

“I obviously did not think about what happened in the past but what I can say is nobody has to worry about the future of the club because it is in good hands and has a really good team together, and so that is obviously the basis for a good future.”

Motivation a factor for floundering Reds?

Former Newcastle and Tottenham midfielder Jermaine Jenas believes Liverpool’s recent successes could now be affecting some of the players’ motivation.

The BBC Radio 5 live pundit said: “There are a few questions that need to be asked of these players in the summer as to what do they want.

“Has [Jurgen Klopp] come across a group of players that went to Liverpool to win something and they have achieved it?

“It is a fact that happens to players. Jurgen Klopp could have players in the dressing room right now that believe they want to move on to something else.

“I am not saying they want to, I am trying to find a reason why these players don’t seem to have that motivation factor within themselves at this minute at that team.”