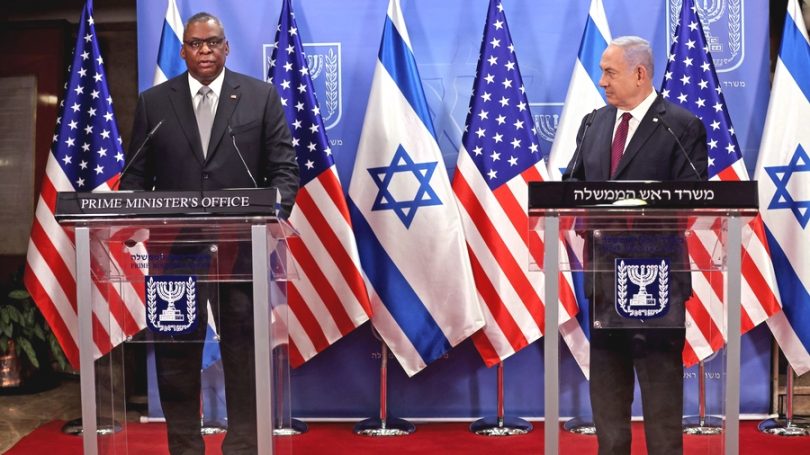 TEL AVIV: The Biden administration says it had no role in the explosion on Sunday at an Iranian uranium enrichment facility. Iran has blamed Israel and vowed to take revenge.

Why it matters: The administration is attempting to negotiate a return to the 2015 Iran nuclear deal, with a second round of indirect talks set to start on Wednesday.

The timing of the incident, along with several recent Israeli strikes on Iranian ships, could make Biden’s diplomatic challenge more difficult.

What they’re saying: “We have seen reports of an incident at the Natanz enrichment facility in Iran. The United States had no involvement, and we have nothing to add to speculation about the causes,” a senior Biden administration official said.

Speaking alongside Austin, Netanyahu stressed that Iran was the gravest threat in the region and that Israel would never allow Iran to obtain a nuclear weapon.

Austin stressed the U.S. commitment to Israel’s security but did not mention Iran.

Later talking to journalists, US Secretary of Defense Lloyd J. Austin said that Israel is a key strategic partner and friend, and we won’t lose focus on the threats that they face.

While answering to a question regarding Iran, he said that our efforts to engage Iran in diplomacy on the JCPOA, those efforts will continue, and I’m very supportive of the president’s efforts to negotiate a way ahead there.

He added that his expectation is that we’ll continue to focus on — on doing what the president’s trying to achieve there, so —

He further said that “I’m here to — to reassure the leadership of our commitment as a — as a strategic partner. I expect to engage him in key areas of defense cooperation, just as I did with Minister Gantz yesterday. And so I think our — that’ll be the focus of our conversations”.

“Well, they have great capabilities as it stands, and of course, we want to make sure that we remain interoperable; that we’re — in terms of our plans, our concepts, and how we use our equipment, I think it’s real important that we continue to work on that partnership” Secretary Austin.

He further said that I think their focus is they have a laser focus on making sure that they maintain a competitive edge and that I think they’re doing a tre-mendous job, obviously. And anything that we can do to help, we certainly wi-ll. We will continue to do.

Regarding the US support to normalize the relations between Israel and Arab and other Muslim nations, he said “I think I said I’m supportive — we are supportive of that, and certainly, we have great relationships with many of the Arab and Muslim nations in the region. And so anything that we can do to facilitate that, certainly, we will continue to do that”.